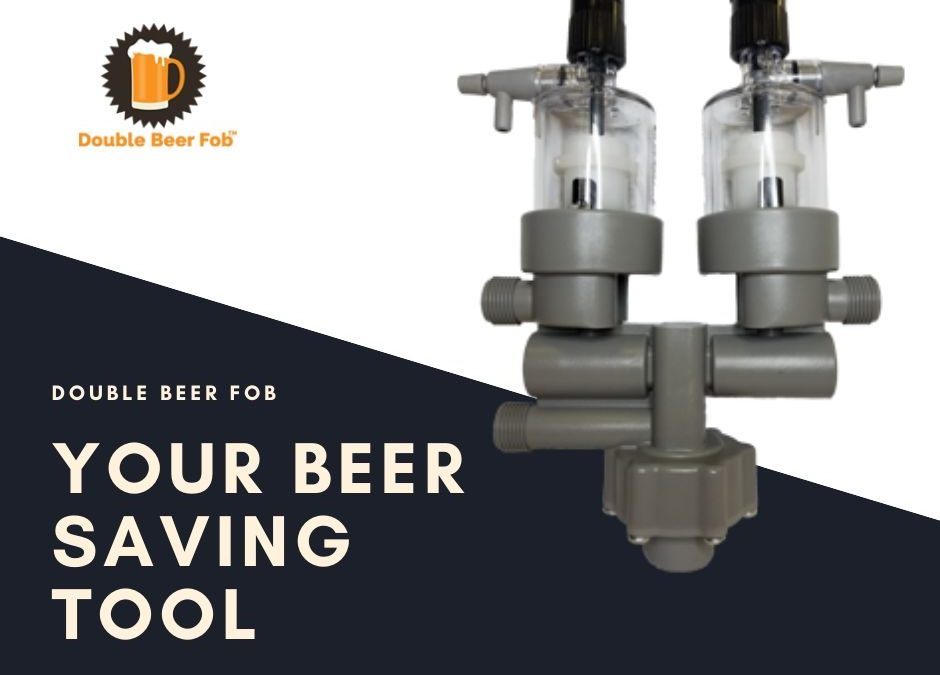 When you visit a beer serving bar, you might have noticed that there are several levers on the top of the counter through which beer of different brands is served to the customers. Ever wondered where this beer comes? It is a long-draw system that has brew kegs stored at a distance, like in cold storage, which has supply lines laid to get the beer from kegs to the levers and ultimately to the beer mugs. There’s a unique tool, Double Beer FOB, that helps in the continuous flow of the beer from one end to the other. In this blog, we’ll get to know about it in detail.

Many a time, when the keg is about to get empty, the pressurized air in it enters the supply lines attached to it. It then travels to the lever in a mixed form. The air and the remaining beer combine together to become froth. This froth is what gushes out of the lever in a messy way and creates a scene. This indicates that keg needs to be replaced and the customer has to wait until he gets his beer from the new keg. Here, we can observe multiple instances where the bar owner is in a loss. Firstly, he lost quite an amount of beer in the form of foam. Secondly, the mess created, either on the staff pulling the lever for the beer or the customer, denotes carelessness and leaves a negative impact. The third point is that customers will have to wait now because of the delay caused by the changing of the keg. Last but not the least, it will now take time to clean the supply lines off the foam. All this is not what good beer bars do.

FOB is Foam/Froth On Beer. While that being said, Double Beer FOB is a foam detector tool that is installed on the new keg and supply lines. Everything remains the same, just that, now the beer travels through this tool first and then to the supply lines, finally reaching the levers.

This tool works on two kegs at a time. The tool can be attached to two kegs. When one line gets empty, the other starts working immediately. This doesn’t stop the flow of beer and keeps the supply lines going. It also gives time for the bar staff to change the empty keg and replace it with a full one by the time the second one is working. On the serving end, the customers don’t have to wait for beer.

When the supply lines remain full of beer at all times, they remain clean and free from the deposition of bacteria, yeast, and other microorganisms. It further saves time on the cleaning of pipes. A single keg attached to the lever will ultimately result in a time gap when you’ll have to change the keg once the beer is over. It can be used continuously by changing kegs on one unit of FOB detector only.

This FOB detector can be easily attached to the wall using a wall mount. Just snap the Double Beer FOB over the bracket and attach the kegs to it. Now that you’ve stopped the beer flow in the pipes, it is obvious for the foam to occur for one or two pours at first. But now, the FOB detector system has been installed, enjoy endless beer from the levers.

When one keg empties and you have to switch the empty keg with a new one, follow the steps mentioned below after ensuring that each side is at the same pressure levels.

Step 1 – Push in the vent button until the beer fills the chamber completely. It will make the floating plate rise slowly.

Step 2 – After doing so, let the chamber be filled with beer and leave no space for foam. Turn the float-release knob anti-clockwise to make the floating plate rise to the top of the chamber.

Step 3 – Turn the float-release knob clockwise once the beer stops rising. This is the time when you have to install the full keg to the side. By this time, the FOB would have shifted the supply to the second keg which is already installed on the second side of the detector.

All these steps need to be repeated when the second keg gets empty too.

So, what happens when a Double Beer FOB is used. When one keg gets empty, the beer at tap stops without dispensing any foam until the detector shifts the flow to the second keg. This repeats every time a keg empties saving beer from splashing on the customer or the staff. It creates no mess on the tabletop also.